Round 14 of J1 2020 sees me collaborate with another fan as @vegalta_blog – author of the excellent https://vegaltasendaienglishblog.wordpress.com/ gives us a deep insight into Vegalta Sendai, our next opponents. As always comments and feedback are welcomed, I’ve not been to Panasonic Stadium since February so I’ve really enjoyed interacting with fellow JLeague fans online recently.

Neither side comes into this clash in great form, both having only won once in their previous five J1 games. Sendai, who made the Yurtec such a fortress in 2019 have failed to win in six home ties this time round, while Gamba, who only took 20 points on the road last year have four wins and a draw from their five away games thus far in 2020.

Vegalta are under new leadership this year with former Montedio Yamagata coach Takashi Kiyama taking over from the long-serving Susumu Watanabe and he’s endured a tough baptism. Long-term injuries to key players such as captain Simao Mate and left-winger Isaac Cuenca have definitely hindered the pace of the side’s development under their new coach. Additionally Kiyama has tried to move away from the rigid 4-4-2 employed by his predecessor and instead is currently operating a 4-2-1-2-1 or 4-3-3, depending on your preference. From the outside I think I can see what he’s trying to do, but similarly to Ange Postecoglou’s first year in Yokohama, as of yet he doesn’t have the right balance in the squad to play the kind of football he wants. It will surely take at least one more off-season before he can mould the team into his image.

Despite not boasting a great record away against Sendai in the past couple of years Gamba will come into this game as favourites. Vegalta’s record of 11 points from the first 12 games which has included only 2 victories (1-0 at bottom club Shonan in round 2 and a surprise 2-1 win at Jekyll and Hyde Kobe last month) means they are on paper the weakest side we’ve faced for some time. With this being the start of a three game week and fixtures away to Kashiwa (Wednesday) and home to Shonan (next Sunday) following quickly there may be a temptation to rotate the squad, but I feel in a bid to regain some momentum, Miyamoto will field a pretty strong starting eleven for this one.

Tactically, Urawa and Tokyo have shown other J1 sides the blueprint of how to play against Gamba in Suita. However, as the Nerazzurri are set up to play on the counter attack, so far it’s proven harder for teams to get the upper hand in their home clashes with the men in blue and black. In our previous away tie at Kashima, Patric was used effectively as a long ball option which meant we could clear our lines quicker, it’s possible a similar tactic could be used here. I’d also expect Kosuke Onose to move back to the right wing to provide a more attacking threat than Ryu Takao could offer last week, while it’s likely that Yuya Fukuda could come in for Hiroki Fujiharu, who has looked decent going forward, but has been plagued by uncharacteristic errors at the back in recent weeks.

Gamba have come out second best in their last two trips to Sendai, both by a scoreline of 2-1. Kim Young-gwon netted his only Gamba goal to date to give the Nerazzurri an early lead in round 9 last year, but Katsuya Nagato’s deflected strike in first half injury time, followed by Shun Nagasawa’s winner against his former charges in the 91st minute swung things in the home side’s favour. This was a case of déjà vu for both teams as in the same fixture in 2018 Kazuma Watanabe fired Gamba into a first half lead only for two Sendai goals in the space of four second half minutes to turn the tables. Prior to that Gamba had won three in a row at the Yurtec Stadium, scoring three times in each game. Vegalta, on the other hand, have never won a league match in Suita. 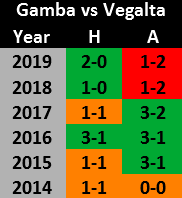 No new injury concerns to report, Ryo Shinzato is still believed to be out, but elsewhere only fatigue seems to be an issue amongst the squad with captain Genta Miura, midfielders Shinya Yajima and Yosuke Ideguchi as well as star forward Takashi Usami surely due a rest soon. Should they be given a breather, excellent U23 attacking duo Shuhei Kawasaki and Shoji Toyama could be options to come into the squad, as could Ren Shibamoto whose return to the U23 ranks has co-incided with an upshoot in their form. At the back Riku Matsuda will be looking to come back into the top team set up and left-sided defenders Tatsuya Yamaguchi and Keisuke Kurokawa will surely be thirsty for J1 game time.

Vegalta certainly don’t have their injury troubles to seek coming into this one with no fewer than six first-teamers on the treatment table. Club legend Shingo Tomita is out for the year with knee trouble while captain and inspiration Simao Mate hasn’t featured since the league’s re-start in June. Further forward, off-season recruit from Tosu, Isaac Cuenca has missed the entire campaign to date with an ankle problem. Attackers Ryo Germain and Shuhei Akasaki as well as sitting midfielder Yoshiki Matsushita have all picked up knocks in recent weeks which have put them out of contention. I can’t find any confirmation on the status of special designated player Hisashi Appiah Tawiah who seemed to be struggling with a slight injury at the end of the defeat by Yokohama F.Marinos at the beginning of August or right-sided midfielder Ryohei Michibuchi, but my feeling is they are probably unavailable for selection at the moment. 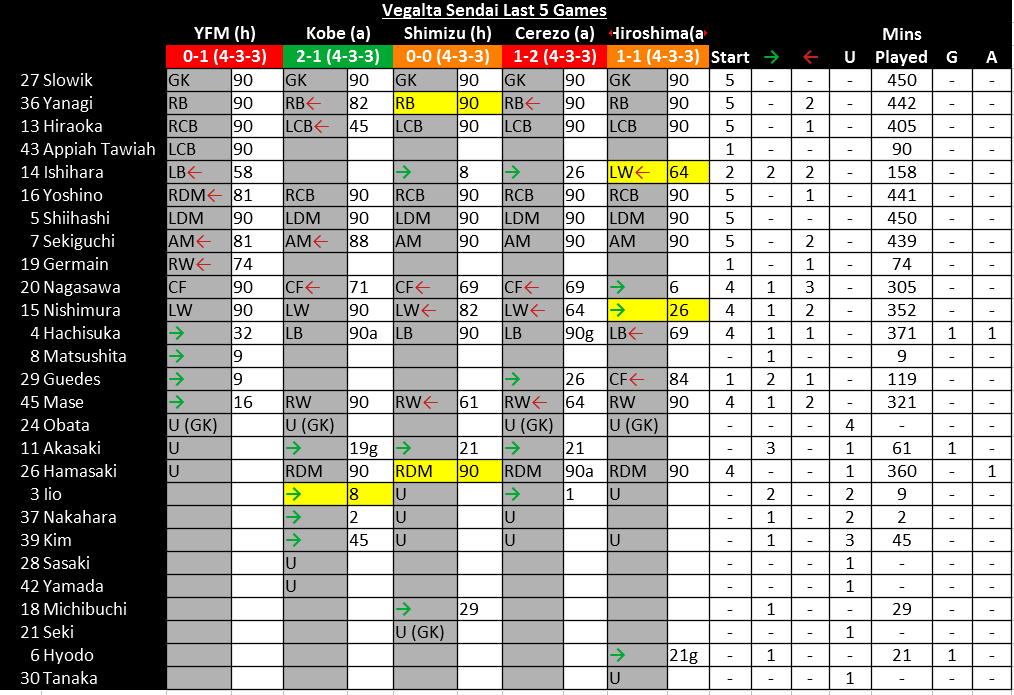 Thanks again to @vegalta_blog for his brilliant rundown on the Vegalta squad which you can read below. Please check out his blog for recent Sendai match previews and reports.

#24 Jakub SLOWIK – The Polish goalkeeper joined Vegalta Sendai after the departure of Daniel Schmidt to Belgium. He has provided trustworthy and reliable goalkeeping performances for Sendai. Unarguably, Vegalta Sendai would have gotten 4-5 points less without him between the sticks. His commanding presence is outstanding. You could hear him shouting at his teammates throughout the game.

#36 YANAGI Takahiro – 23-year-old loanee from FC Tokyo. Yanagi played under Kiyama at Montedio Yamagata last season. Kiyama brought him in as an emergency replacement for Masato Tokida, who was uncomfortable at the left full-back position. He said that Kiyama taught him the philosophy of aggressive football. He can play on both flanks, but Kiyama mostly uses him on the right and deploys Hachisuka on his opposite side. Gamba Osaka will definitely need to watch out for Yanagi’s contribution and link up play with Mase Takumi down the right.

#16 YOSHINO Kyohei – New signing from Sanfrecce Hiroshima last winter, Yoshino Kyohei is one of only two players who have started every single league game since the restart. He can play either as a center-back or holding midfielder. His interception rate is exceptional, but his weakness is one-on-one defending. A strong striker like Patric could win a duel against him often.

#13 HIRAOKA Yasuhiro – Hiraoka is a veteran center-back who retook his place after losing it early last year. His partnership with Simao Mate was arguably the most critical element that helped us avoid relegation. His aerial presence was outstanding last season, but Vegalta Sendai have struggled to score from set-pieces in 2020. If Simao came back in time for this game, the partnership would give Gamba’s defence a hard time.

#4 HACHISUKA Koji – “Always good” is how our manager Kiyama Takashi referred to Hachisuka. He has been with the club for ten years, playing as a right full-back. After the restart, Kiyama improvised and deployed him on the left instead. He looked uncomfortable at first but adjusted nicely after that. He has scored one goal, provided a few assists, and was selected as one of the best players by DAZN twice. His dedication will be necessary if Sendai are going to beat Gamba.

#26 HAMASAKI Takuma – Former FC Osaka right-back who was signed from Mito Hollyhock last winter. Most people expected him to be behind Iio and Hachisuka in the pecking-order. Still, Hamasaki defied everyone’s doubts in him and has established himself as a crucial holding-midfielder in Kiyama’s team. With an average of 12 kilometers covered per 90 minutes, it seems like Hamasaki is everywhere on the pitch. He also contributes to the attack a lot. Is it possible he will score his first goal in J1 against Gamba Osaka?

#5 SHIIHASHI Keiya – Shiihashi lost his place in the team to veteran Tomita Shingo last summer. At the start of the season, I thought he would have a hard time breaking into the first team, but the arrival of Kiyama transformed him. His partnership with Hamasaki is vital to the team. He can intercept and break down the opposition’s play effectively. Even though Shiihashi is more defensive-minded when compared to Hamasaki, his contribution should not be underestimated.

#7 SEKIGUCHI Kunimitsu – You are the heart of Sendai is the chant that we gave to Sekiguchi last autumn. Having spent 12 years in the northeast, his love for the team is less than no one. He will turn 35 this year, but is still running more than 12 kilometers per 90 minutes on average. Vegalta Sendai’s pressing usually starts from his initiation. This year, Kiyama has mostly deployed him as an attacking midfielder, but with the re-emergence of Hyodo, Sekiguchi may be used in the wide position more often.

#45 MASE Takumi – JFA Special designated player from Hannan University. Mase will officially join Vegalta Sendai from the 2021 campaign, but he has already established himself as a first-team member after four consecutive starts. He was a full-back in his university days, but Kiyama has deployed him as a right wide-forward since Germain Ryo’s injury. His combination with Yanagi is aggressive and furious. He assisted the equalizer that secured us a point against Hiroshima. His header was amazingly saved by Osako earlier in the game. Hopefully, he will score his first J1 goal against Gamba Osaka.

#15 NISHIMURA Takuma – Nishimura returned to Vegalta Sendai after 2 difficult years with CSKA Moscow. His goal scoring in 2018 was prolific, but he has not been able to replicate that level of performance in 2020. He is continually given chances by Kiyama, so I think he will start against Gamba after Ishihara Takayoshi’s sub-par performance in Hiroshima.

#20 NAGASAWA Shun – Honestly, I would like to write about Alexandre Guedes, but it seems like he took a knock during the last game. Thus, it is very likely that Nagasawa will start in place of him. The ex-Gamba striker is going through a goal drought right now; he has only scored one goal this season. Arguably, our deliveries into him have not been good enough. Nevertheless, his goal-scoring instinct has made him one of the best players we have. Facing a former club should encourage him to prove himself. 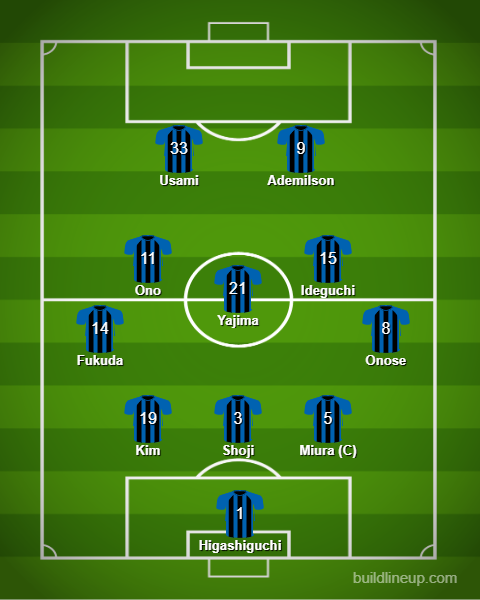 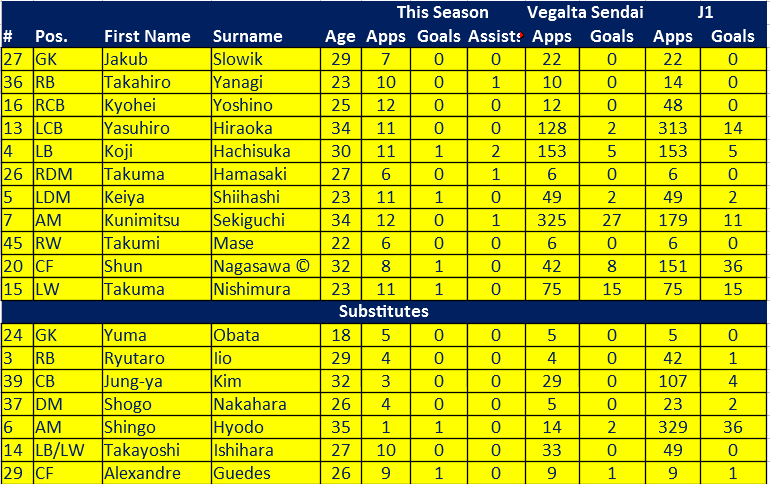 This match could really define the direction Gamba’s season takes, a tame draw or defeat would point to another year of mid-table mediocrity while a comfortable victory would suggest that the home defeats to Urawa and Tokyo were a mere blip. I’m going for a positive outcome, Gamba haven’t scored more than twice this year and neither have Sendai, so goals may be at a premium, I’ll say 2-1 Gamba with Usami and Patric netting the decisive strikes.