It’s officially the half-way point in the J1 League campaign this week, though a quick glance at the number of games each team have played may tell an altogether different story. A quick caveat, I wrote about 60% of this preview before I realised Sapporo were playing in midweek, I’ve tried to make all the necessary changes, but apologies in advance if anything slipped through the net.

Sapporo come into this match fresh (well maybe not as they played on Wednesday) off a 2-0 win in their re-arranged match at Sagan Tosu, this was the first time they’d taken all 3 points for 10 league games. Gamba, by contrast, started 2020 with 5 wins and 16 points from their opening 7 fixtures, but since the start of August, they’ve lost 5 of 8 games and taken just 7 points. Sapporo currently sit 13th in the table, 6 points and 4 places shy of Gamba, but with an additional 2 matches played. Due to sharing Sapporo Dome with the Nippon Ham Fighters in NPB and also travel restrictions after the league’s re-start in June, they’ve been handed a lopsided schedule with long stretches of away games at the beginning and end of the year bookending a mid-season laden with matches in Hokkaido. The mid-year departures of goalkeeper Gu Sung-yun (Daegu) and the prolific Musashi Suzuki (Germinal Beerschot) have made my pre-season prediction of a 14th place finish look better than it otherwise could have.

The good thing about Consadole from a neutral perspective is that their games are always a good watch. I was treated to quite the match when I tuned into their 4-3 home defeat at the hands of Urawa last weekend. Head coach Mischa Petrovic’s footballing philosophy is simple, attack! attack! attack! The formation you’ll see at the start of the game, and the positions you’ll often see the players appear in during the 90 minutes will vary wildly. Expect to see right-sided centre-back Ryosuke Shindo regularly overlap right wing-back Lucas Fernandes and link up with the Brazilian and Yoshiaki Komai. In the middle of the park, Takuma Arano and Shunta Tanaka will often drop deep into defence to give captain and centre-back Hiroki Miyazawa the chance to bomb forward. All of this switching around can make them hard to handle, but also allows plentiful opportunities to counter attack against the league’s least structured defence. At present only Shimizu (40) have conceded more than Consadole’s 34 in 17 matches.

With neither side in great form, issues like Sapporo having a mere 64 ½ hours between full-time in Tosu and kick-off on their home turf at the other end of Japan on Saturday, could play a big role. Gamba would do well to aim for an early goal as they are yet to lose after scoring first, this stat also stands true if they hold the lead at half time. By contrast, they’ve only come from behind to win once this year, and in that match with Oita, they only trailed for 4 minutes.

These two teams have really only been playing each other regularly since Sapporo became a J1 staple in 2017, all the recent results can be seen in the table below. Personal highlights of mine would, of course, include the 5-0 rout in Suita last October with all the goals coming in the second half. Jungo Fujimoto’s beautiful finish in the 2-0 victory at the Sapporo Dome in 2017 is another great memory as is the 3-0 home win back during the J2 title-winning season of 2013, one of my first ever Gamba games which featured a fine, solo Takashi Usami effort as well as a rare effort from Takaharu Nishino, then a highly-rated prospect before having his career decimated by injuries. Ken Tokura’s 95th minute equaliser at Panasonic Stadium in Miyamoto’s 5th game in charge back in 2018 and a limp 1-0 defeat in the first ever Expo Match in 2017 were particularly tough to take. 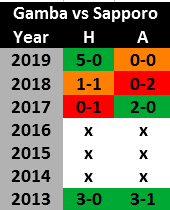 As mentioned previously Yuji Ono (knee) is out for the season while Shinya Yajima (ankle) has missed the past 3 matches and no time-frame has been given for his return. This fixture marks the start of another 3 game match week with difficult looking future opponents in the shape of Nagoya (home) and Hiroshima (away) looming on the horizon, as a result some rotation can be expected. I’d love to see young Shuhei Kawasaki get a start while solid showings from Ryu Takao and Yuya Fukuda against Shonan should hopefully see them retain their places. Shoji Toyama and Dai Tsukamoto both sat out Gamba U23s game with Kataller Toyama last weekend and must be in with a shout of at least some bench time in J1 soon. Kim Young-gwon wasn’t in the squad for the Bellmare game, but I believe he was just being rested. Takashi Usami will make his 150th J1 appearance if selected for this encounter. 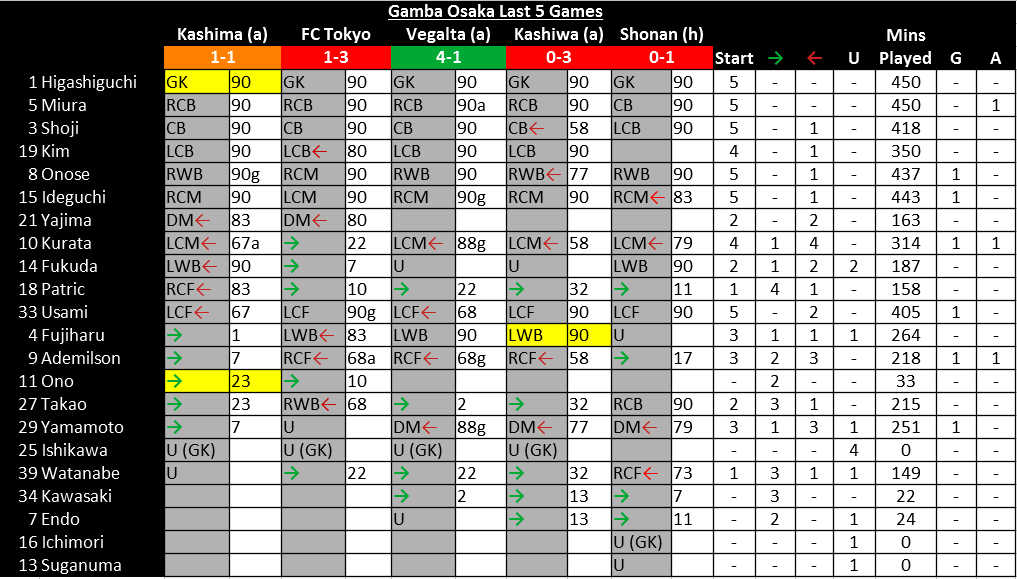 Sapporo don’t have a whole lot of injury issues to contend with. Backup ‘keeper Shunta Awaka is out for the year and defender Naoki Ishikawa hasn’t been spotted in a matchday squad in 2020. Other than that though, fatigue is the only factor likely to rule anyone else out of this clash. 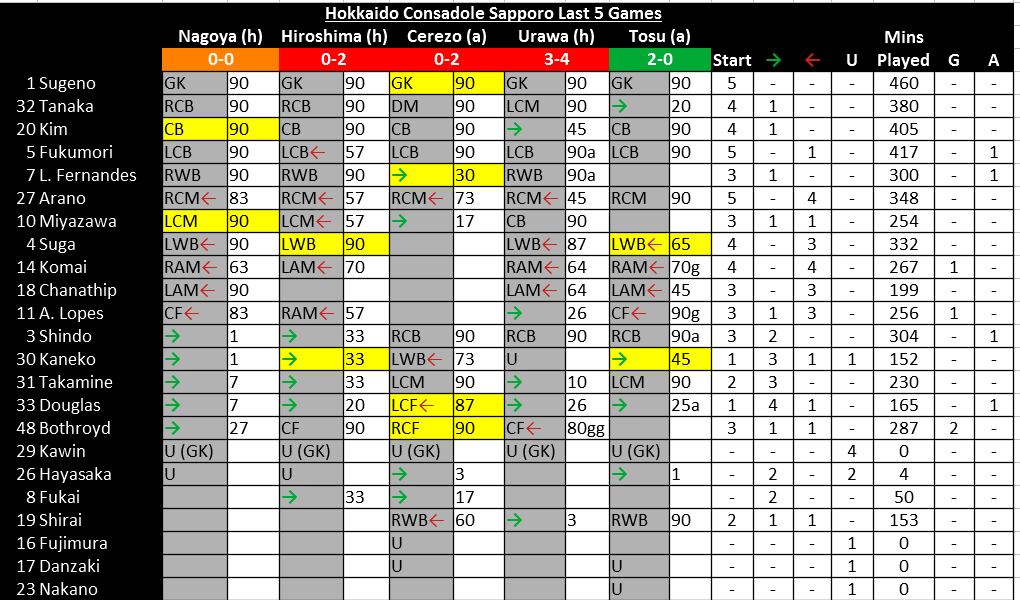 GK #1 Takanori Sugeno – Hugely experienced former Yokohama FC, Kashiwa and Kyoto ‘keeper who took over the number one spot following Gu’s departure during the lockdown. Now in his third year in Sapporo with the first two actually spent on loan from Sanga before he made the deal permanent last winter. It’s likely that he’s just keeping the spot warm before the 2m tall Kojiro Nakano joins next season, Gamba fans will remember him as he was Hosei University’s goalkeeper in their 2-0 Emperor’s Cup win last August.

RCB #3 Ryosuke Shindo – He’ll be named as the right-sided centre-back, but like Ryu Takao, expect to see him bombing forward on the outside of his right-winger. Bagged a hugely impressive 6 goals and 2 assists from defence in 2019, but hasn’t got close to those heights this year.

CB #10 Hiroki Miyazawa © – Mr. Sapporo, centre-back or central-midfielder Miyazawa has been with Consadole since leaving high school back in 2008. He’s closing in on 400 JLeague appearances and at the age of 31 still seems to have plenty of fuel left in the tank.

LCB #5 Akito Fukumori – Moved north to Hokkaido from his native Kanagawa in 2015 after 4 seasons largely spent as a Kawasaki reserve. Possesses a wonderful delivery from both corners and free-kicks which he showcased to devastating effect against Urawa last Sunday. His inch perfect cross for Jay’s second goal against Reds was surprisingly his first assist of the year, in 2019 he provided 8 which put him joint 3rd in J1 alongside Ademilson and Kyogo Furuhashi.

RWB #7 Lucas Fernandes – Now in his second season in Sapporo, Lucas initially came in on loan from Fluminense in his native Brazil, but after a successful first year which saw him play 31 times in J1, he made the deal permanent in the off-season. He looks to be one of Consadole’s main attacking weapons down the right flank, though maybe it’s not such a good idea to let him take penalties. He missed a vital spot kick in the final minute of additional time in a 0-0 draw with Nagoya a few weeks back.

RCM #27 Takuma Arano – Would probably be named most disliked player by opposition fans if such a vote were ever to take place, though I’m sure he’d take that as a compliment. Arano’s off-the-ball antics often overshadow what a fine, versatile attacking option he is. Most at home in the middle of the park, he’s also been called into action in more advanced areas due to a lack of alternatives and has re-paid his coach with 4 goals already this season.

LCM #32 Shunta Tanaka – Centre-back or central midfielder currently in his rookie season after joining from Osaka University of Health and Sports Sciences (Hiroki Fujiharu’s old stamping ground). Osaka- native Tanaka was actually called up to the Japan national team squad while still a student, though he didn’t win any caps, he’s also a strong contender to be selected for the Tokyo Olympics squad.

LWB #4 Daiki Suga – Attacker who Petrovic has converted into a dangerous left wing-back. Suga, like Shindo and Arano is a Sapporo U-18 graduate who turned pro in 2017 after making 5 appearances as a type-2 player in Consadole’s promotion winning season the year before. He has been capped by Japan at all levels from U17 through U23 and scored on his senior team debut against Hong Kong in the East Asian Cup last December. Was an unused squad member in last year’s Copa America.

RAM #14 Yoshiaki Komai – Spent 5 seasons with Kyoto after coming through their youth system and made well over 150 J2 appearances with Sanga. Got his big move to Urawa and after two decent years in Saitama he made the move north to link up once more with his former Reds coach Petrovic. Injury limited him to just 3 league games in 2019, but he’s back fit and firing this term.

LAM #18 Chanathip Songkrasin – One of the league’s leading assist makers, the 158cm Chanathip even chipped in with a rare header away to Sendai earlier in the campaign. Capable of playing just off the main striker or as a false-nine, Gamba will need to be very wary of his trickery and ability to slip between the defensive and midfield lines.

CF #48 Jay Bothroyd – Has been in Japan since 2015 when he was recruited by Jubilo Iwata in J2. After helping them gain promotion to the top flight at the first time of asking, he’s gone about building himself an impressive legacy. Now in his fourth year in Hokkaido, the 38 year-old is still able to bully defenders and poses a real aerial threat in the box as evidenced by his headed double against Urawa last weekend.

Other Options – Tall South Korean centre-back Kim Min-tae could be used if Petrovic wants to move Miyazawa into the middle of the park. Youth team graduate Kazuki Fukai has been a regular in central midfield for the past 2 seasons, though he seems to have fallen out of favour recently due to Tanaka’s emergence. Tomoki Takamine and Takuro Kaneko are 2 rookies who’ve been used in a number of roles this campaign, but have yet to nail down starting spots while Ryota Hayasaka, Kosuke Shirai and Yoshihiro Nakano are wide players who haven’t seen much game time in 2020. In attack, dangerous Brazilian forward Anderson Lopes is now back from an extended visit to his homeland, however, he hasn’t yet regained the form that saw him net 9 goals in 25 J1 games in 2019, and compatriot Douglas Oliveira recruited out of Serie C in his home country last winter has flattered to deceive thus far in his Sapporo career. 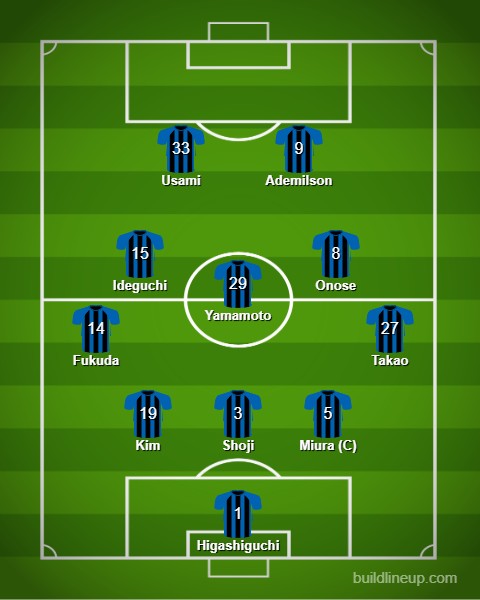 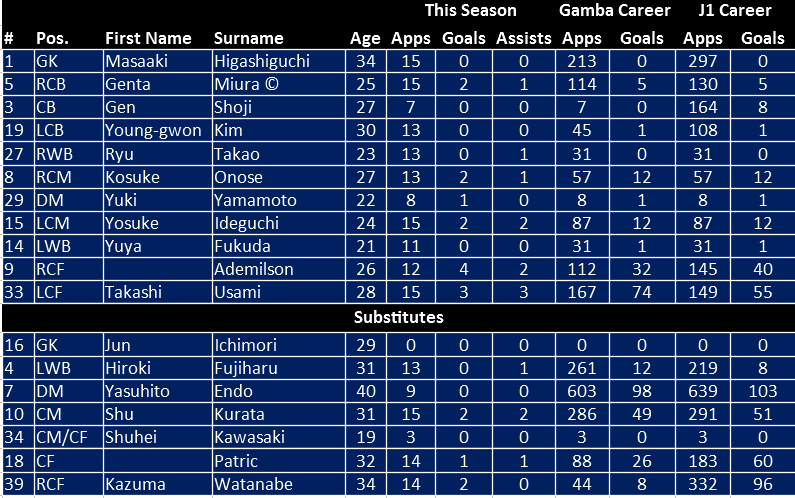 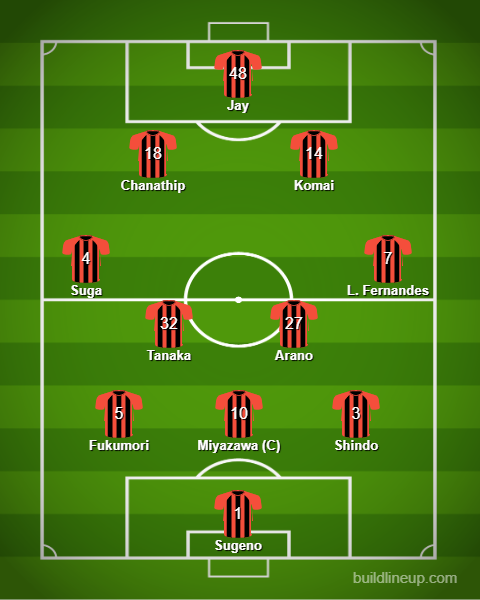 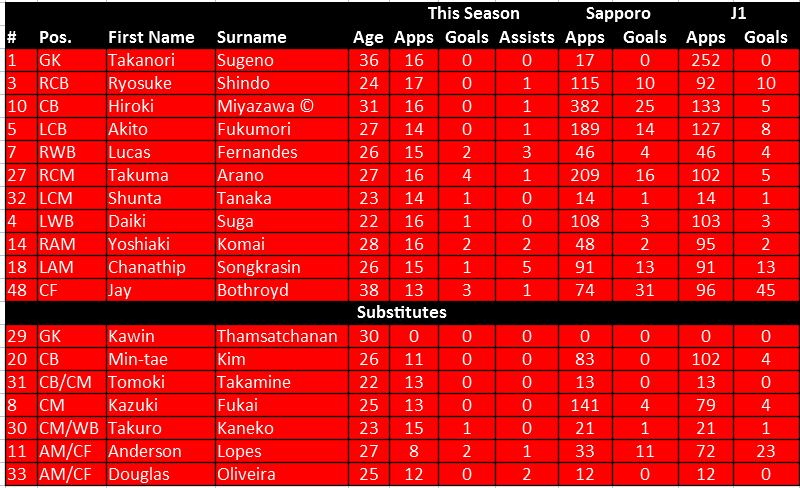 I’ve reached a pessimistic point in my Gamba predictions and see Sapporo, buoyed by snapping their winless run, taking this one rather comfortably, I’ll go 3-1 to the hosts.