Gamba ran out 2-0 winners in a hard fought match at home to Kashima Antlers last Saturday night. For my thoughts on that game and also the shock departure of Yasuhito Endo on loan to Jubilo Iwata please check out this week’s edition of the J-Talk Podcast (@JtalkPod) available on most podcast apps.

Gamba travel down to Kyushu to face off against Sagan Tosu in a game re-arranged after the original clash in August was postponed due to Tosu being struck down by a COVID-19 cluster. Now back in action, Sagan currently sit 14th in J1 with 18 points from 18 games while Gamba are full of confidence on the back of 4 successive victories which have taken them up to 5th in the standings, a win here would send them above Nagoya and into a potential ACL spot.

Tosu haven’t had a midweek off since returning to J1 action on September 5th following their 4 week Coronavirus induced hiatus. Having played 9 matches both before and after that break, now is a good chance to compare and contrast their form. They failed to find the back of the net in 6 of their opening 9 league fixtures including their first 5, winning just once and taking 7 points in the process. There were on average 1.7 goals per Sagan fixture prior to the break which contrasts with the 3.4 we’ve seen since. Performances have also seen an upsurge with 3 wins and 11 points being taken from the 9 matches since the resumption of their campaign.

After many amateur pundits including myself tipped them to finish last, Sagan have confounded their critics with some decent displays, including home and away wins over high-flying FC Tokyo which should serve as a reminder to Gamba of how tough this game will be. Youth team products Daiki Matsuoka and Kaisei Ishii have performed well, while Daichi Hayashi and Ryoya Morishita are rookies out of university who’ve really stepped up to the plate this year and Riki Harakawa in midfield is a rare example of a Tosu player who’s in the prime of his career.

After having a relatively light schedule compared with their rivals up until this point, Gamba now find themselves in the middle of a fixture deluge. They’ll travel to Japan’s capital after this game to face FC Tokyo on Saturday (kick off 14:00 JST) before hosting Yokohama F.Marinos the following Wednesday night, they then return to Kyushu to square off against Oita Trinita a week on Sunday. These 4 games could really set the tone for the remainder of the campaign. A win in this encounter would mean Gamba had already equalled last year’s total number of wins (12) despite having played 14 fewer games. It seems that the Nerazzurri have returned to their late 2016 / early 2017 level in the final glory days of Kenta Hasegawa’s reign, so it’ll be interesting to see the next steps Tsuneyasu Miyamoto takes to develop the team further.

Gamba have a pretty dreadful recent record in matches away to Sagan, winning once and losing five times since earning promotion back to J1 in 2014. The sole victory came in 2017 and was actually Gamba’s final three-pointer of that season, despite the match being played in round 24. The 3-0 pasting at the beginning of Tsuneyasu Miyamoto’s reign in August 2018 was particularly harrowing, although the Nerazzurri took heed from that humiliation and subsequently won their next 9 league matches. Last year’s 3-1 reverse with Ryotaro Meshino netting an injury time consolation was especially hard to take as Tosu had scored just once in their ten previous fixtures leading up to that clash.

Shinya Yajima returned from his sprained ankle as a late substitute in the win over Kashima and is in contention to start here. Yuji Ono (knee – season) misses out against his former club as does captain Genta Miura (thigh). With midweek games this Wednesday and next we should see some extra rotation in the upcoming games. Endo is obviously out of the equation which could open the door for Kohei Okuno or Ren Shibamoto to earn a call up from the U23s while left-back Keisuke Kurokawa and centre-back Riku Matsuda are others who we may see in the J1 team before much longer. Kim Young-gwon will play his 50th league game for Gamba if selected for this and Ademilson will make his 150th J1 appearance. 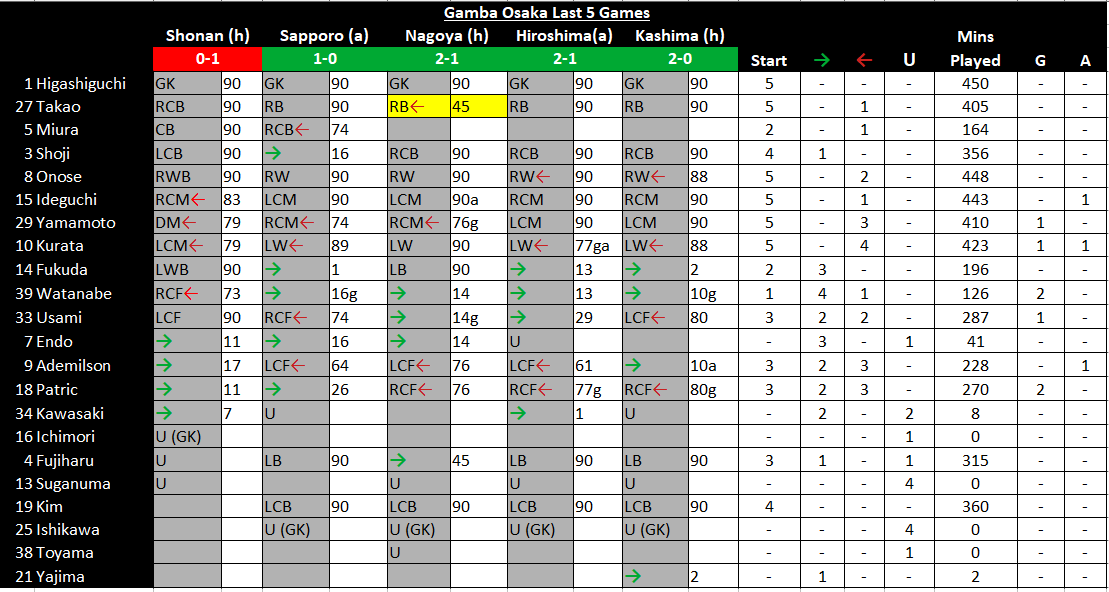 Tosu don’t have their injury concerns to seek, especially at the back. Brazilian defender Eduardo was last seen in the 2-1 win over Kashiwa on September 13th while Daiki Miya, an off-season capture from Vissel Kobe has been plagued by fitness issues all year. Versatile veteran Hideto Takahashi went off injured against FC Tokyo a couple of games back and is likely to miss this one. Elsewhere, fellow Takahashi, Yoshiki has only played once in J1 this year. Uruguayan forward Renzo Lopez was an unused sub in Sagan’s first match after their COVID enforced lockdown, but hasn’t been seen since and Brazilian winger Tiago Alves hasn’t made a matchday squad since being sent off for two yellow cards against S-Pulse at the end of July. 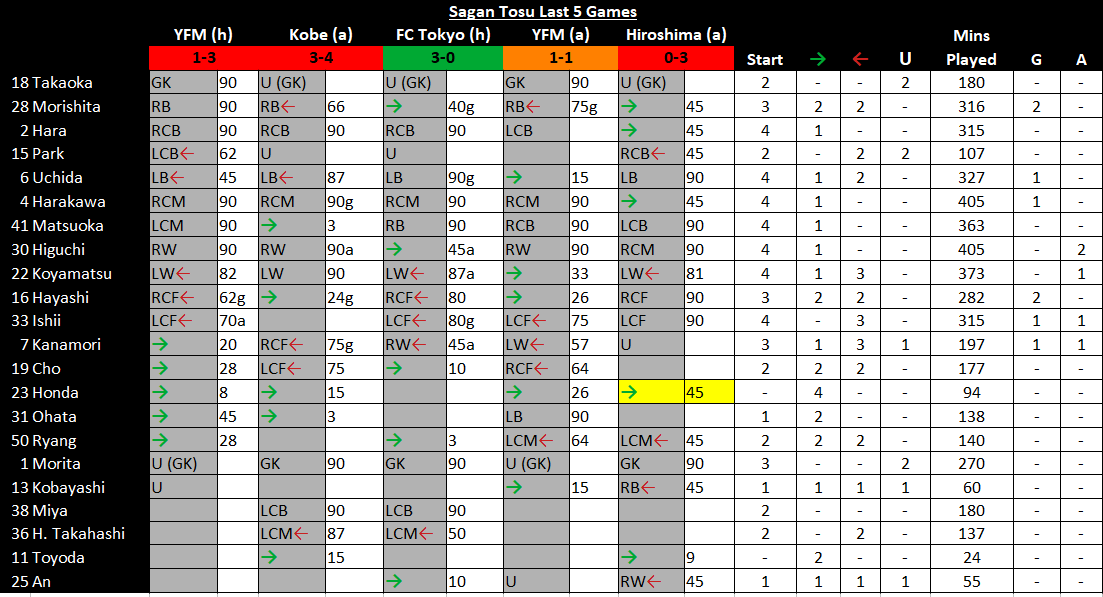 GK #18 Yohei Takaoka – Former Yokohama FC product who took over between the sticks midway through last season. He initially impressed, particularly in their 2-1 win away at Cerezo last Obon, but became more erratic as the campaign wore on. Has been rotating the jersey and captaincy with the more experienced Tatsuya Morita in recent weeks.

RB #28 Ryoya Morishita – Exciting attacking full-back who’s in his first year as a pro having joined from Meiji University last winter. Likes to get forward and has scored twice in Tosu’s previous three matches. Would surely make a J1 University Rookie XI for 2020.

RCB #41 Daiki Matsuoka – Better known as a nuggety central midfielder, youth team product Matsuoka has been filling in at the back in recent weeks. He seems decidedly less confident in his new role and has been responsible for a couple of goals conceded as a result of poor passes out of defence. Standing 170cm he’s not your archetypical centre-back, but this is the reality that faces Tosu due to their poor financial situation.

LCB #2 Teruki Hara – Jack-of-all-trades this season and last, Hara’s current role is in the heart of Sagan’s defence, though he is essentially capable of playing anywhere along the back or in midfield. A contemporary of Gamba’s Takahiro Ko at Funabashi Municipal High School in Chiba, he spent 2 seasons with Niigata before heading west to Saga. Has 1 senior Japan national team cap to his name and is a contender for the Tokyo Olympics squad.

LB #6 Yuto Uchida – Gamba Youth graduate who only made a solitary League Cup appearance (in a 2-0 win away to Tosu in 2014) during his time with the senior team. Including an initial loan spell, he played close to 150 J2 games in 5 seasons with Tokushima Vortis before earning another crack at J1 with Tosu this year.

RCM #4 Riki Harakawa – Now in his 4th season with the club, former Kyoto and Kawasaki playmaker Harakawa is a real threat from set-pieces. A member of the 2016 Olympic squad, the guys over at J.League Regista did a great piece on him, you can check it out here… https://jleagueregista.wordpress.com/2020/09/05/blanklisted-ep03-harakawa-sagan/

LCM #23 Fuchi Honda – Another youth team graduate who’s in his first year as a pro, I actually tipped him to star when I first guested on the J-Talk Podcast back in June. He hasn’t yet lived up to my expectations and has played off the bench mostly in recent weeks. With that said, at just 19 he still has a long future ahead of him and gaining J1 experience at such a young age will only benefit him.

RW #7 Takeshi Kanamori – Attacker or winger who turned his loan deal from Kashima into a permanent one over the winter. Picked up an injury earlier on in the campaign, but has been back firing since the one month COVID-19 layoff.

LW #22 Tomoya Koyamatsu – Started off his career with Nagoya before dropping down to J2 for a decent 3 year spell with Kyoto Sanga. 9 goals and 6 assists while forming a deadly attacking combination with Kazunari Ichimi and Keiya Sento earned him a second shot in J1 and he’s looked to be one of Tosu’s most dangerous attackers this year.

RCF #19 Cho Dong-geon – Veteran South Korean forward who’s been with the club since 2017. Probably can’t consider himself to be first choice, but due to the avalanche of fixtures this season he’s seen plenty of action as part of Sagan’s rotational policy.

LCF #33 Kaisei Ishii – Yet another Tosu Under-18 graduate, Ishii has actually been with Sagan since he was in elementary school. With 3 goals and 3 assists already in 2020, the 20 year-old sophomore pro is likely to be attracting attention from other J1 sides in the not too distant future.

Other Options – As mentioned above, goalkeepers Takaoka and Tatsuya Morita seem to be rotating the gloves, and if I’ve cracked Kim’s code then Takaoka will start this one with Morita in the bench, though there’s no guarantee I’m right. At the back, former Marinos and Reysol centre-back Park Jeong-su seems to be behind full-backs and midfielders to play his preferred position which says a lot about how much his coach rates him, left-back Ayumu Ohata is yet another Tosu Under-18 product who has looked good in brief flashes this year. Further forward, Yuta Higuchi can be found on the right flank or in the middle, I think he’ll be rested for this one, but I believe he is first choice on the wing. South Korean winger An Yong-woo will probably be on the bench here, I’ve also put top scorer Daichi Hayashi, an Osaka Taiiku University graduate, there as I think he’ll be rotated out while club legend Yohei Toyoda is seeing less and less action as the years go by.

Not a happy hunting ground for Gamba, but they do come into this game buoyed by a 4 game winning run while their hosts are in the midst of a fixture pile-up and have real issues covering the centre-back position. With that in mind, I’ll say Gamba will snap their poor recent record in Kyushu and take this one 2-0.