Note: This preview was written prior to Sapporo’s acquisition of Hugo Vieira and the announcement that Daiki Suga had tested positive for COVID-19.

Gamba welcome Hokkaido Consadole Sapporo to Panasonic Stadium for a Hallowe’en showdown this Saturday night with the home side looking to make it 10 games unbeaten which would be their best run since 2011. Gamba will don special edition uniforms designed by Hidekichi Shigemoto in this match, however, they are still reeling from the drink-driving scandal involving Ademilson that was made public on Monday. The Brazilian, who of course netted the winner in last week’s 2-1 victory over Kashiwa, is currently suspended by the club awaiting the outcome of an investigation and it seems unlikely that he’ll take the field again in a Gamba shirt after bagging 34 goals and 20 assists in 121 J1 games.

Both Gamba and Consadole had the rare luxury of a full 7 days to prepare for this fixture and the home team come into the match 3rd in the standings, level on points with city rivals Cerezo, who they play on Tuesday, so a win here would provide a psychological boost going into that clash. Despite finishing just a point below Gamba in 2019, Consadole have performed considerably poorer this time around. I predicted they’d end up 13th in my pre-season forecast and that’s exactly where they lie at the moment, 21 points behind Gamba.

With 6 wins, 1 draw and 5 losses at home this year, Gamba’s form inside Panasonic Stadium has been decidedly shaky. That being said, since the shock 1-0 reverse against Shonan Bellmare on September 13th, they are unbeaten in 4 games, all against top half rivals, Kashima (2-0), Nagoya and Kashiwa (2-1) and Yokohama F.Marinos (1-1). Additionally, their remaining 5 home fixtures in 2020, including this one, are all against bottom-half opposition, Kobe (11th), Tosu (15th), Shimizu (17th) and Sendai (18th) are all that’s left after Sapporo and interestingly enough victory in each of those 5 games would see Gamba match their 2014 title-winning points tally (63) regardless of what they do in their away fixtures.

Last weekend’s tight win over Kashiwa saw Gamba overtake the 47 points accrued in 2019 with 10 games to spare. They’ve won 15 J1 matches this season to date, their biggest total since 2016 (17) and the 2011 campaign’s figure of 21 wins could be a realistic target. As alluded to above, between 18th June and 18th September of that year the Nerazzurri embarked on an 11 game unbeaten run which consisted of 9 wins and 2 draws, how the home faithful would love a win in this fixture to set up the chance of equalling that impressive feet in Tuesday’s Osaka Derby.

Improved defending by the team as a whole has been a key element in this season’s revival of fortunes. Gamba are currently projecting to concede 37 goals this term (the Kawasaki away game notwithstanding) which would be their best defensive performance since 2015. All who witnessed the Kashiwa game would surely have been impressed by their tight-knit defending, closing players in dangerous shooting areas down quickly and putting their bodies on the line to block shots. Indeed we can see from the stats that this year Gamba have been outdone 15 times to 9 in overall efforts on goal, whereas when we look at attempts on target, the Nerazzurri hold the upper hand 14-3-7. Putting players under pressure when they attempt shots and headers in or near the box and making it very difficult for opponents to gain clear sights of Masaaki Higashiguchi’s goal have been vital components in Tsuneyasu Miyamoto’s defensive masterplan this term.

Saturday’s opponents Hokkaido Consadole Sapporo have endured a tough campaign which hasn’t been helped by the departures of Gu Sung-yun (FC Daegu) and Musashi Suzuki (Beerschot). Thai assist king Chanathip has missed chunks of games and they never look the same without him on the field while fellow strike partners Jay and Anderson Lopes have been hindered by the heavy summer schedule and being stuck in Brazil due to Coronavirus restrictions respectively. On the flip side they have invested quite a bit in youth and will hope this bears fruit in the coming years. Shunta Tanaka (DF/MF), Tomoki Takamine (MF/DF) and Takuro Kaneko (AM) are a trio of rookies out of university who have all put their stamp on the team this season. Giant ‘keeper Kojiro Nakano, who Gamba supporters will remember as Hosei University’s stopper in the 2019 Emperor’s Cup humiliation, and attacker Tsuyoshi Ogashiwa have both featured as designated special players ahead of turning pro in 2021. Taika Nakashima, a young forward the same age as Shoji Toyama will move north to Hokkaido next year after graduating from Kunimi High School in Nagasaki, Kazuma Watanabe’s alma mater, he comes highly rated too.

Consadole come into this clash in decent form with only 1 defeat in their previous 5 matches, however, this was preceded by a horror run of just 1 win in 13 games that was bookended by losses to Vissel Kobe, 3-2 at Sapporo Dome on August 2nd and a 4-0 spanking at Noevir Stadium on September 26th. Without trying to rain on our northern rivals parade too much, one could argue that this recent mini-revival may simply be down to playing several teams below them in the standings, Yokohama FC (14th), Shonan (16th), and Sendai (18th), though before anyone tries to shoot me down I will acknowledge that their 1-0 home win over Kashima was mightily impressive.

Due to having to share Sapporo Dome with the Nippon Ham Fighters baseball team, Consadole’s fixture list has had a very lopsided look to it this year. All of their first 5 league matches were away from home and they’ll also round out their campaign with 3 of their final 4 games on the road. They only have 3 home matches left in 2020 compared with 6 away fixtures, indeed this encounter is the first of a 3 game road trip for Sapporo with Kawasaki and FC Tokyo to follow (so not getting any easier then, eh?). They currently hold a 3-2-6 away record this season with early wins at Yokohama FC (2-1) and Kashima Antlers (2-0) in rounds 2 and 3 respectively followed by their most recent road victory over Tosu (2-0) on September 6th. They have been on the end of several heavy defeats outside the comforts of Hokkaido with Kobe (4-0), Marinos (4-1), Kashiwa (4-2), Nagoya (3-0), Shimizu (3-1), Cerezo (2-0) all getting the better of them.

Away from home Consadole average a scoreline of 1.09-1.92 which doesn’t really differ wildly from their 1.4-1.71 home record. If we compare their year-on-year statistics we can see that their goals conceded in 2020 column (47) is only 2 shy of last season’s performance with 9 fewer matches played. Head-coach Mischa Petrovic has used the absence of relegation to really push his all-out attacking philosophy and they’ve already let in 3 or more goals in a single match 9 times this year (or more often than once every three games) compared with the 4 occasions it occurred in 2019.

Gamba are unbeaten in the last 4 fixtures between these 2 sides and have kept clean sheets in the previous 3. Last year’s 5-0 home rout saw all the goals come in the second half and although a repeat would be welcome by the Nerazzurri faithful much closer contests are usually the order of the day when these two meet. 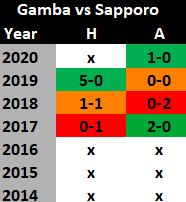 Yuji Ono (knee surgery – season) and Ademilson (club suspension) are the two definite absentees for Gamba this weekend. In defence, Genta Miura (thigh), Hiroki Fujiharu (concussion) and Gen Shoji (ankle) have all been out for several games and no timeline has been set for their return. Ademilson’s absence should open the door for young Shoji Toyama to make his J1 debut some time in the not too distant future. 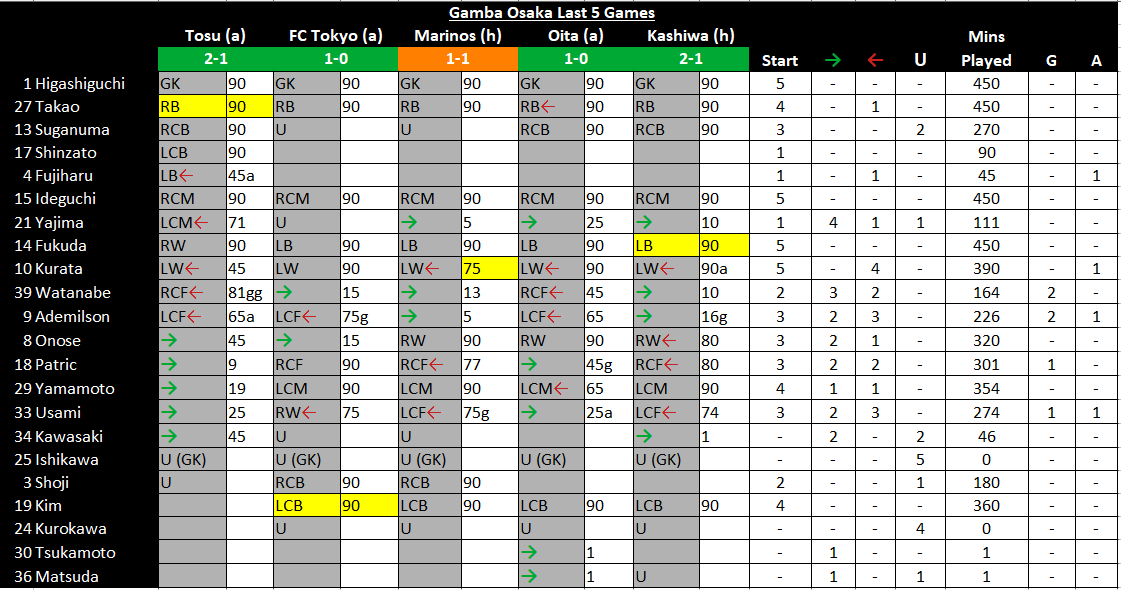 Thai assist-kingpin Chanathip has been a key loss for Sapporo this term and he last appeared in the 2-0 away win at Tosu on 16th September, he was subbed off at half-time in that game. Defender Naoki Ishikawa (ankle) and reserve ‘keeper Shunta Awaka haven’t played yet this season due to injury, though neither would likely feature in a Consadole Best XI. Right-sided centre-back Ryosuke Shindo and central midfielder Kazuki Fukai seem to have fallen out of favour recently, though no injury has been reported. Young goalie Katsuya Nakano missed last week’s win over Yokohama FC, I’m guessing this could have been down to his studies. English forward Jay Bothroyd will make his 100th J1 appearance should he take the field in this game. 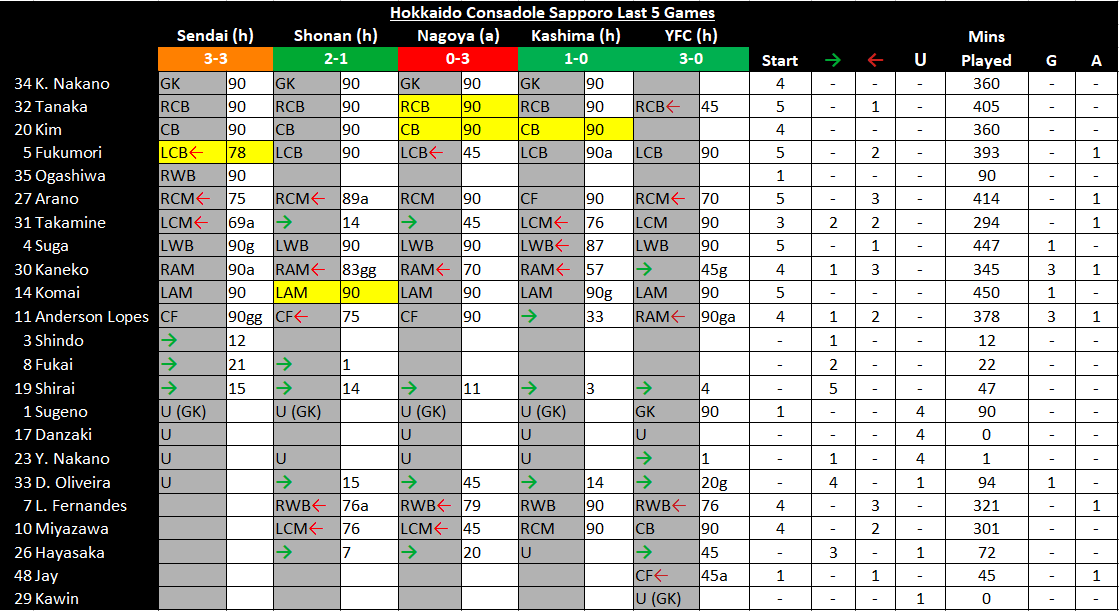 It will be interesting to see how Gamba approach this game as our next opponents Cerezo have a free weekend and there is basically only 2 ½ days between this match and that one. However, after the Osaka Derby, Gamba then have an 8 day hiatus until they play the final Kansai Derby of 2020 against Vissel Kobe so it’s likely the Nerazzurri will be at full-strength for this one. A fit-again Shoji or Miura would surely come in for Suganuma, even though he’s performed dutifully in the past few games. Fujiharu will likely be eased back on the bench when he does return, such has been the form of Yuya Fukuda. I wonder if Keisuke Kurokawa playing the full 90 against Fukushima in midweek can be taken as evidence of Fujiharu’s impending return? Elsewhere, Yajima for Yamamoto in central-midfield is a possibility and Watanabe partnering Usami in attack in place of the recently turned 33 Patric is another option. 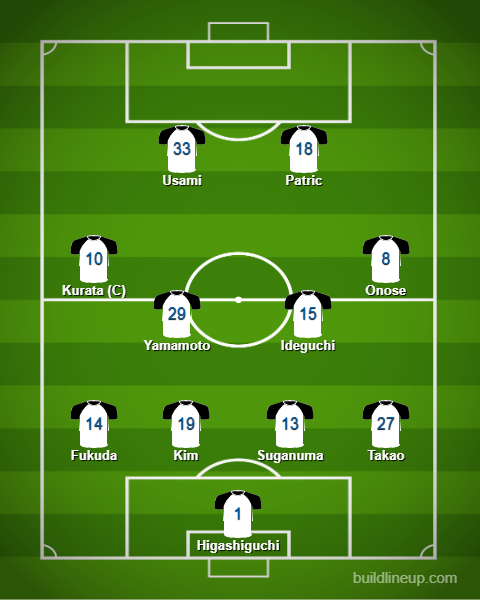 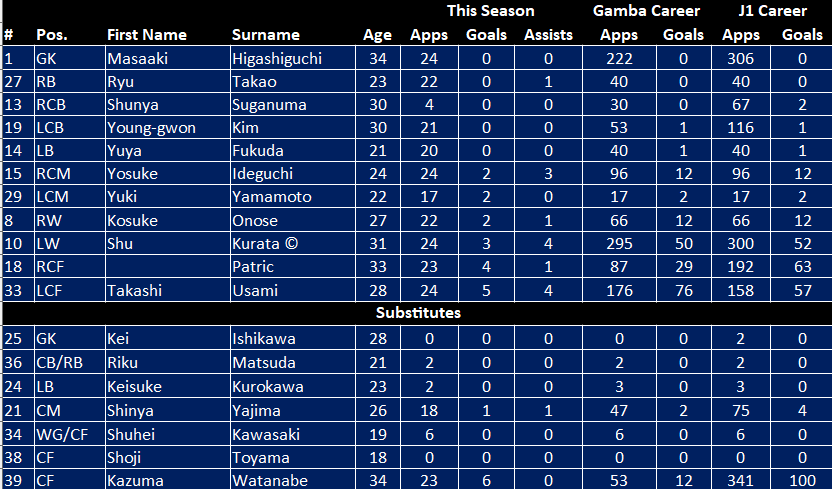 I’m certain that Sapporo will line up in the formation below and there will also be a lot of shifting of positions mid-match with the wide centre-backs pushing forward along the flanks while the central midfielders shuffle back to cover. Personnel wise, Nakano could start in goal if he is free from his studies, it’s also possible that Miyazawa will play at centre-back which would allow Takamine to come in alongside Arano. In attack Jay is an option as the focal point with Anderson Lopes then moving into Kaneko’s spot in what would be a very attacking move by Mischa Petrovic. 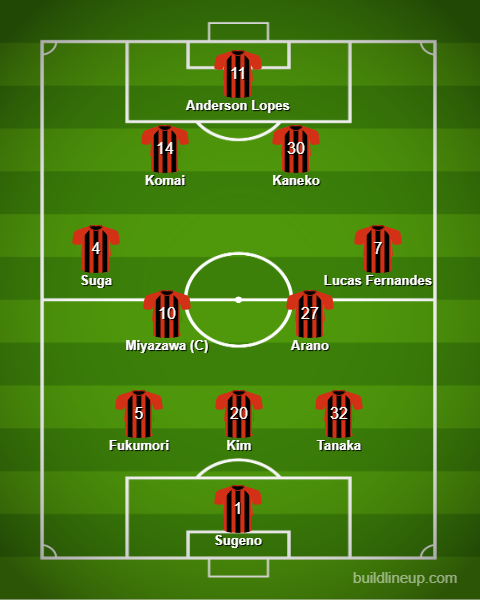 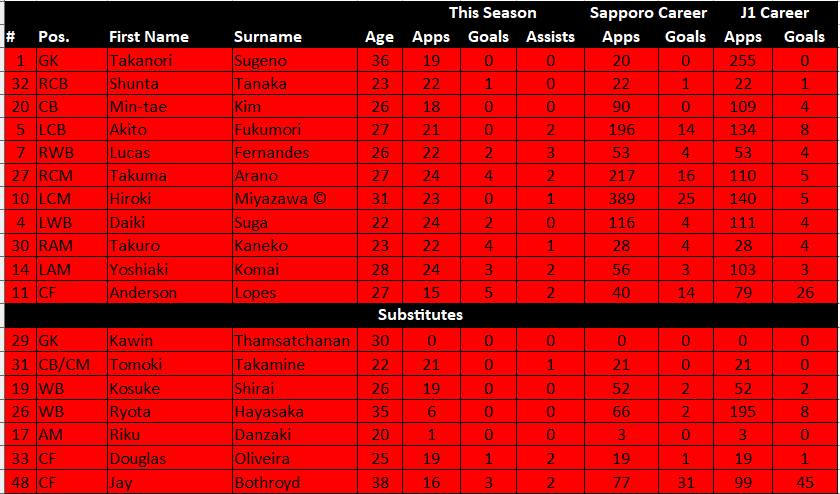 Gamba will look to place off field issues to one side and put Sapporo to the sword in this one. I don’t see anything like a repeat of last season’s 5-0 thrashing, so will instead opt for a comfortable 2-0 scoreline in the hosts’ favour.