Gamba and Grampus face a turnaround reminiscent of 2020 in this matchday 11 clash which has been re-scheduled due to both sides’ participation in the Asian Champions League. Just a quick update, the game will go ahead at it’s originally scheduled time of 19:00 (JST) as the state of emergency has been lifted in Aichi ahead of Nagoya’s home opener.

Also, before I get into things fully, a gentle reminder that I was on last week’s J-Talk Podcast and Ben, Sam and I looked at both Nagoya and Gamba in detail (I’d say our comments on Yoichiro Kakitani were pretty accurate given his debut on Sunday lol). If you haven’t already, please have a listen. It’s actually available on Spotify now which gives you even less excuse to miss out!

Owing to my work / Gamba’s schedule, I’ll probably be on Twitter less in the early part of this season, HOWEVER, I encourage you to give @GawainStifyns, @JsoccerMagazine, @lionelpiguet and @90thMinuteSub a follow for more opinions on Gamba and the other Kansai clubs. Also for our opponents, please check out GRAMFRECCE (@J_LEAGUE_ULTRA) for the Nagoya take on things, I know he’s looking to connect with more Grampus fans from around the globe, so don’t be shy.

Gamba made a disappointing start to their 2021 campaign, going down 1-0 away at Vissel Kobe. Kyogo Furuhashi’s lob from Hotaru Yamaguchi’s through ball consigned the Nerazzurri to yet another opening day defeat, meaning last season’s 2-1 victory at Yokohama F.Marinos is their only round one win since 2011. Vissel began the brighter of the two and Gamba were left chasing shadows for the opening half hour or so, however, they began to take a grip on proceedings in the middle third of the game and Kobe had to be thankful to the quick reflexes of ‘keeper Daiya Maekawa on several occasions. The match shifted in the home side’s favour during the second-half water-break when the withdrawal of Patric and Usami disrupted the visitors momentum. Furuhashi sent a warning shot across the bows by rattling the Gamba crossbar shortly before opening his account for the year 11 minutes from time. This was Gamba’s first loss in a league match in Hyogo since 2016 and kantoku Tsuneyasu Miyamoto has work to do ahead of the upcoming encounter with Nagoya.

Nagoya came through a physical, and at times heated clash with J1 newboys Avispa Fukuoka, running out 2-1 winners in the end. Star winger Mateus scored near the start of both halves to leave Grampus in cruise control before left-back Yutaka Yoshida unfortunately lobbed the ball over his own ‘keeper Mitch Langerak under pressure from Avispa sub Takeshi Kanamori.

Saturday was my first look at the new 4-3-3 formation and although it’s early days yet, put me down as a sceptic. It seems like we’ve moved some ornaments around on the mantelpiece, but have fundamentally been left with the same pieces performing the same function in slightly different positions. It’s one thing to adopt Kawasaki’s formation, but quite another to acquire their mindset. Miyamoto appeared to send Gamba out to win 1-0 at Kobe, essentially the same strategy as last season. However, as I’m going to outline below, 4-3-3 is not the best option, in my book, to achieve results while maintaining a defensive frame of mind.
Issue 1 – lack of cover for the fullbacks – Takashi Usami (right wing) and Shuhei Kawasaki (left) are not naturally defensive players so a lot of responsibility falls on the midfield trio to protect the back 4. Due to the movement of Kobe’s attacking midfielders, they were able to work space down Gamba’s flanks and cause problems. The fact that impressive J1 debutant Shion Inoue and Samurai Blue international Gotoku Sakai found themselves up against newly converted right-back (more on that later) Kosuke Onose, merely exacerbated the problem. Second half sub Asahi Masuyama hugged the right touchline after coming on and found plenty of space to roam in that unguarded area.
Issue 2 – Space between the midfield and defensive lines – This was one of the reasons that 3-5-2 got canned midway through 2020. Yuki Yamamoto in the midfield anchor/quarterback position was arguably Gamba’s best player against Kobe, however, on a couple of occasions he stepped up to try and win possession, but didn’t succeed and neither Ideguchi nor Yajima moved back to cover, leaving a gaping hole in front of Miura and Shoji. Last year with the double volante system and Ideguchi playing alongside one of Yamamoto or Yajima, better protection was afforded to Gamba’s centre backs. Granted Ideguchi still looks a little rusty after his injury layoff and increased energy levels from him will also help in a 4-3-3.
Issue 3 – Usami on the wing – Whenever I see FC Tokyo play Diego Oliveira on the right flank, as an opposing fan I’m always relieved because a proven J1 goalscorer and penalty box threat is being moved away from his natural habitat. Ditto Usami, he can play wing for a few games or so, but I don’t want to see him stuck there for a whole season. It gives him defensive responsibilities he’s not good at and takes him away from the second striker position in the central attacking area where he thrives.

To round up this mini-rant up, I don’t feel either Onose or Yajima did enough last season to find themselves shoehorned into the side this time round. If there are fitness or other off-field concerns about Ryu Takao then I take this back, but he was one of the best right-backs in J1 last year, so why has he been replaced by a right winger? Still, at least by changing to 4-4-2 in the second half against Kawasaki and 4-2-3-1 near the end of the Kobe game, Miyamoto is showing a willingness to consider alternatives.

Briefly, to end this section on something of a high note, I have Vissel finishing 7th this year, and Gamba actually lost 3-0 to Kashiwa Reysol (7th in J1 2020) last season, so this may be a step in the right direction (clutching at straws?? lol) I also genuinely think the Nerazzurri put on a better overall performance on Saturday than they did in their 2-0 win at the same venue last summer, but hey, that’s football.

It seems like there won’t be many changes in terms of tactics or personnel for Nagoya Grampus this season. After taking the underachievers up from 13th in 2019 to 3rd last year, Italian kantoku Massimo Ficcadenti clearly has the backing of the power brokers at Toyota Stadium. Yoichiro Kakitani (Cerezo) was the only new face in the starting lineup against Fukuoka on Sunday. For those of you new to JLeague, Ficcadenti will set his side out in a defensively minded 4-2-3-1 formation with the key players at the back being Australian international ‘keeper Mitch Langerak (17 clean sheets in 2020), centre-backs, Yuichi Maruyama and Shinnosuke Nakatani and holding midfielder Sho Inagaki. Of that quartet, only Inagaki (missed 24 minutes) didn’t play every minute of every game last season, a quite phenomenal achievement all round.

Of course, as J1’s top ranked defence in 2020 (conceding just 0.82 goals per game), it is that part of the team that gets most of the headlines, but that’s not to say there’s no attacking flair on display. Brazilian right-winger Mateus, who scored against Gamba in this fixture last season, topped both Grampus’ goalscoring and assist rankings in 2020 with 9 and 8 respectively. His brace against newly-promoted Fukuoka on the opening day has already signalled his intentions. Look for him drifting all over the attacking third, he’ll also take most of Nagoya’s set plays.

For areas Gamba could look to attack, although Inagaki and Yonemoto cover acres of ground in the middle of the park, they do have the potential issue of a lack of cover for both full-backs with neither Mateus nor whoever plays on the left, Yuki Soma or Manabu Saito, being particularly adept at defensive support. Set plays will also play a key role with 2 of Gamba’s 4 goals against Grampus in 2020 coming from dead ball situations. Nagoya dealt well with the aerial attack from Emil Salomonsson’s crosses at the weekend, but Yamamoto and Usami will look to pose different problems on Wednesday night. 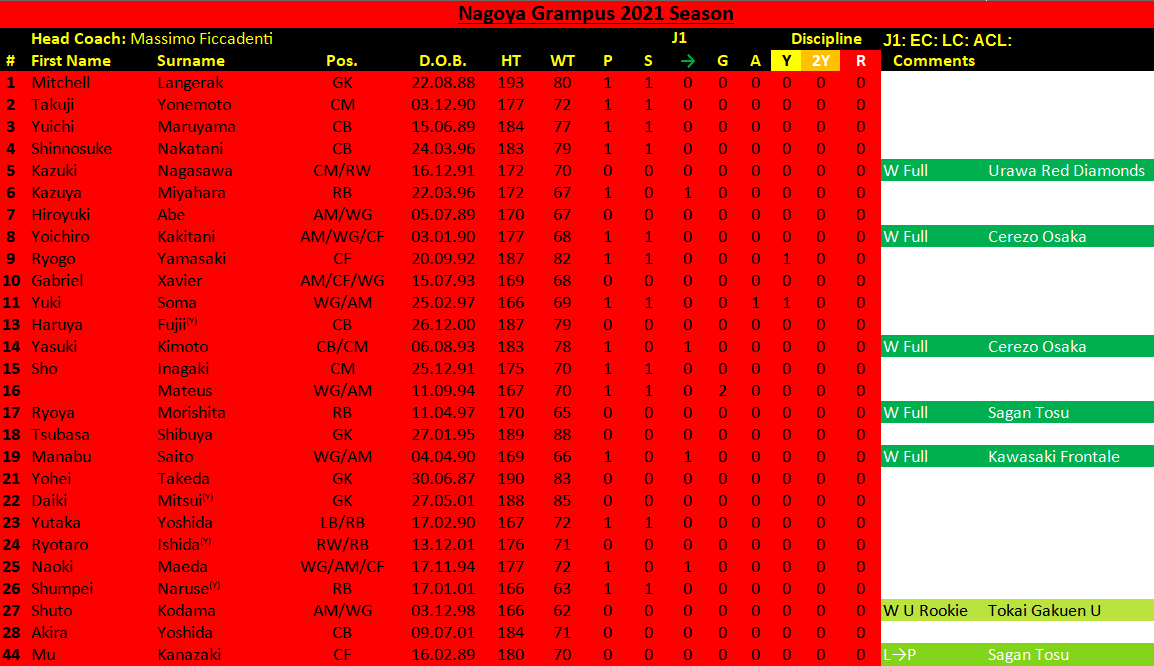 Grampus may have had the league’s strongest defence in 2020, but Gamba had no problems breaching it, notching 4 goals across their home and away games. Indeed they’ve scored exactly twice in each of their six league encounters with Nagoya since the Aichi side’s promotion back to J1 in 2018. Incredibly, you have to go back to August 14th 2014, a 1-0 home loss, for the last time the Nerazzurri netted less than two goals in a single match in this fixture. 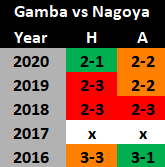 Wingers Yuji Ono and Haruto Shirai (both recovering from knee surgery) are definitely out for Gamba. Kim Young-gwon and Yuya Fukuda have been absent from the matchday squad for both the Japanese Super Cup and last weekend’s defeat at Kobe. I believe Kim isn’t fully ready after missing a large part of the pre-season training camp in Okinawa and I haven’t heard anything regarding Fukuda. Central midfielder Yosuke Ideguchi will make his 100th Gamba and J1 appearance in this game. Fukuda will take his tally to 50 Gamba/J1 matches, should he play.

Ex-Japan international forward Mu Kanazaki is a long-term absentee after undergoing knee surgery towards the end of 2020. Neither, rampaging right-back Ryoya Morishita or former Gamba treble-winner Hiroyuki Abe were in the Grampus squad for the trip to Kyushu at the weekend, I haven’t heard any word as to whether that was down to injury/illness or just non selection.

Despite my reservations outlined above, it seems like 4-3-3 will remain in vogue for a while yet. With so many games in such a short space of time it’s inevitable some rotation will take place. I’ve selected Onose at right-back in the hope that if I put him there then Miyamoto may see sense and choose Takao instead. Other alternatives to the team below could be, Kawasaki and Patric keeping their places at left-wing and centre-forward respectively, and Ju Se-jong coming in for Shinya Yajima in the centre of the park (this would probably see him in the midfield anchor role with Ideguchi (right) and Yamamoto (left) just ahead of him). Should Kim Young-gwon or Yuya Fukuda regain full fitness then both would definitely make the matchday squad.

He may not be everyone’s cup of tea, but for blog writers like me Massimo Ficcadenti is a breath of fresh air with his lack of rotation and predictable starting elevens. I’ve gone for the same side that saw off Fukuoka on Sunday. However, if the Italian is feeling a bit racy then he may tweak his attack with Gabriel Xavier, Naoki Maeda or Manabu Saito coming in, while further back Yasuki Kimoto could be an option as it appeared Takuji Yonemoto took a bit of a knock against Avispa. 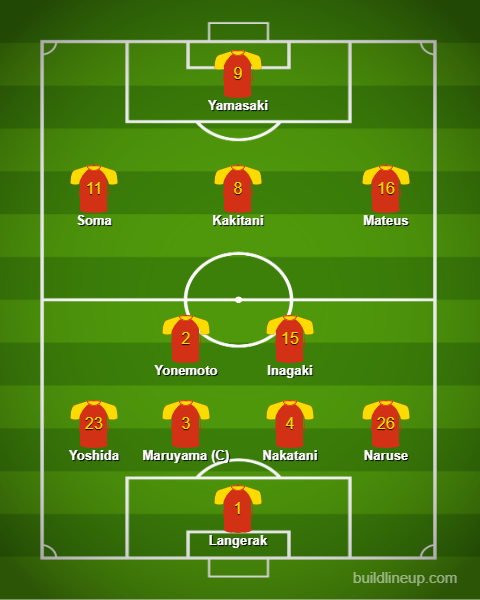 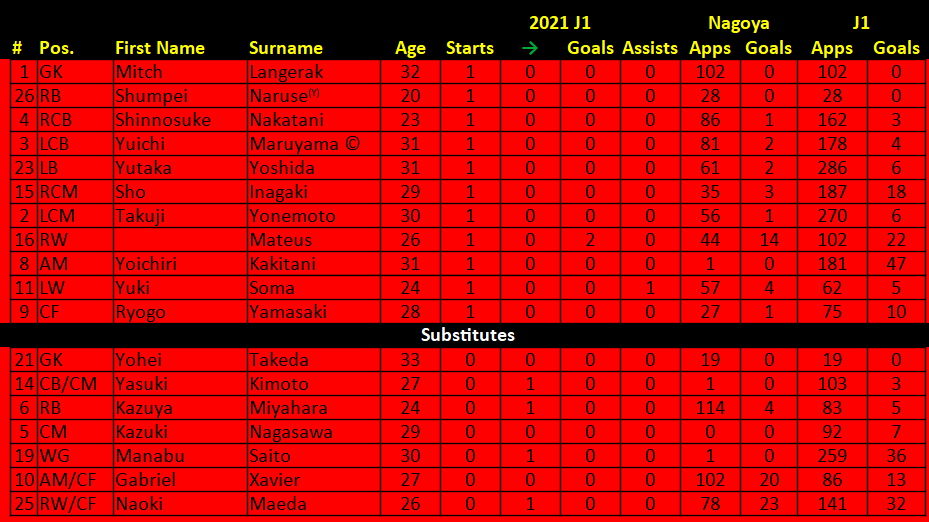 Two teams with reasonably strong defences, so it may seem a little counter-intuitive to predict goals, but looking at the history of this fixture and considering the possibility of errors resulting from a mixture of rustiness and fatigue, I’ll go for 2-2.

[…] I’ve already talked about Gamba ad nauseum in the previews of the postponed matches against Nagoya and Kashima, so I thought I’d dedicate this entire post to a team who don’t enjoy a great deal […]