Thanks again to everyone who read, liked, shared and commented on my J1 and J2 Predicted Lineups posts that I put out about a month before the 2021 season started. The response to them was truly phenomenal and frankly blew me away, so much in fact, that I’ve been re-thinking how I should structure my blog (I’m always open to new ideas, so please tell me what you want!)

The J1 Predicted Lineups post is still getting a fair bit of traffic even though it is a bit out of date, so I thought I’d do some more research and update things a little. Included in this post is a short comment on teams’ performances in the opening month of the season, a list of currently unavailable players (as of 28 March 2021) and a full rundown of the lineups and formations used by each J1 side over their past 5 league fixtures.

A few qualifiers, the team comments don’t take into consideration this weekend’s Levain Cup games as personally I don’t think a whole lot can be read into them, for example if Tosu and Sapporo start to show the form they displayed yesterday in J1 matches, then I’ll revise my opinion of both sides. Secondly, regarding injuries, some of the players I’ve named as unavailable haven’t been officially confirmed as being injured. In certain instances I’ve assumed they are out due to being absent from the matchday squad for a prolonged period of time or being subbed off early in a game and missing subsequent fixtures.

Thanks again for your support and please enjoy!

Comments: Have started the season in ominous form, only dropping points at much-improved Kobe. What’s more, Oshima and Noborizato are still to return and strengthen them while João Schmidt almost doesn’t feel like a new signing, he’s bedded in so quickly.
Unavailable: Kyohei Noborizato, Ryota Oshima (injured)

Comments: Only one league match played so not much to discuss. Re-scheduling six fixtures later in the year may see the return of the more defensive 4-4-2 set-up used last season and hopefully the end of the Onose at right-back experiment with Takao returning to take his rightful place.
Unavailable: Jun Ichimori, Haruto Shirai, Yuji Ono (injured), Wellington Silva (Visa/quarantine)

Comments: Their defensive strength means they are Kawasaki’s closest challengers despite having no real goal-scorer. Yamasaki has done alright, but shouldn’t be starting for a title contender and Kakitani has shown nothing so far. Inagaki looks like an early MVP contender, Soma has improved, however Morishita seems to be 3rd choice right back at the moment, perhaps he’s too attack-minded for Ficcadenti, imagine how good Tosu would be if he was still there!
Unavilable: Mu Kanazaki (injured)

Comments: Higher up the league than many would have expected, but the fixture list has been pretty kind to them so far. Okubo’s goals have been a Godsend in the absence of Taggart while Nishio has slotted in well alongside Seko at the back. Recent injuries to Harakawa, Sakamoto and Takagi will really test their squad depth.
Unavailable: Riki Harakawa, Tatsuhiro Sakamoto, Ryuji Sawakami, Toshiyuki Takagi, Hirotaka Tameda, Koji Toriumi (injured), Adam Taggart (Visa/quarantine), Đặng Văn Lâm, Tiago (Visa/contract status unclear)

Comments: The Ibaraki side have made their traditional slow start and will be desperate to get Brazilian midfield duo, Diego Pituca and Arthur Caike on the field as soon as possible. It’s at the back where most of the problems seem to lie, the full-back berths are still up for grabs and none of the centre-backs have covered themselves in glory.
Unavailable: Shoma Doi, Ryuji Izumi (injured), Arthur Caike, Diego Pituca (Visa/quarantine)

Comments: A roller-coaster start to the season from the capital club with, injuries, rotation and Covid-protocol violations preventing them from getting into any sort of groove. They’ve got points on the board early, but a chunk of them came in unimpressive home wins over last season’s bottom 2, Sendai and Shonan. They’ll need to hope Bruno Uvini is the man to shore up a rather leaky rearguard.
Unavailable: Akihiro Hayashi, Kazuya Konno, Manato Shinada (injured), Bruno Uvini (Visa/quarantine) 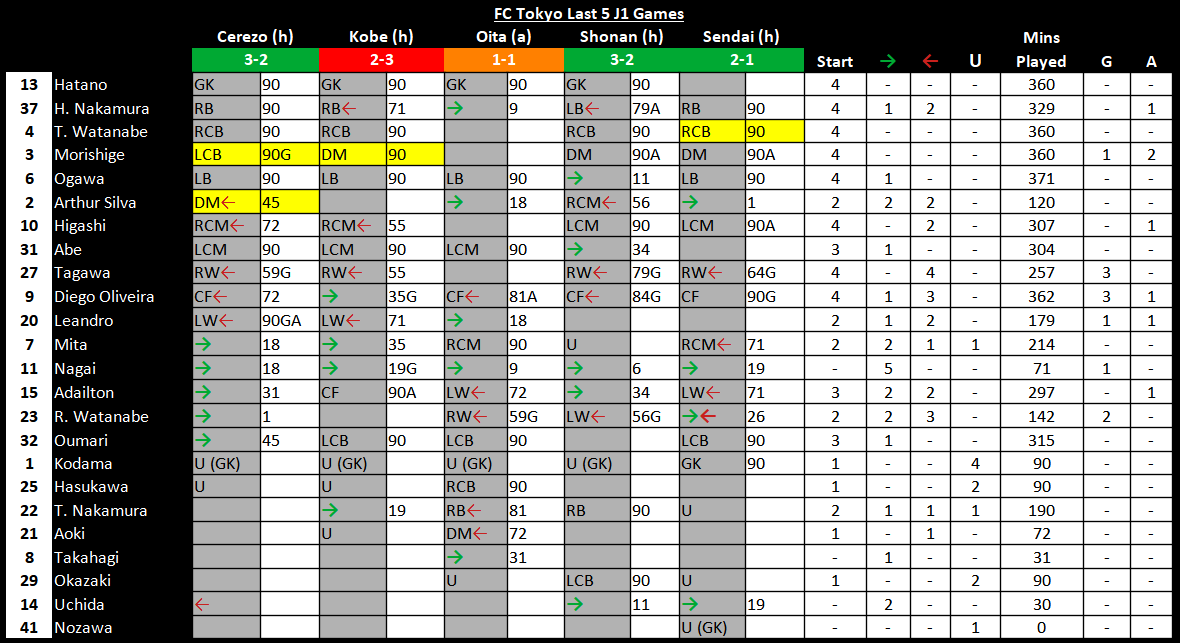 Comments: Olunga, Olunga, where art thou Olunga? A very poor start to the season from Kashiwa and they desperately need the soon-to-arrive Brazilian quartet of, Emerson Santos, Dodi, Angelotti and Pedro Raúl to hit the ground running or the nightmares of 2018 could be lurking just around the corner.
Unavailable: Yuji Takahashi, Sachiro Toshima (injured), Angelotti, Dodi, Pedro Raúl, Emerson Santos (Visa/quarantine) 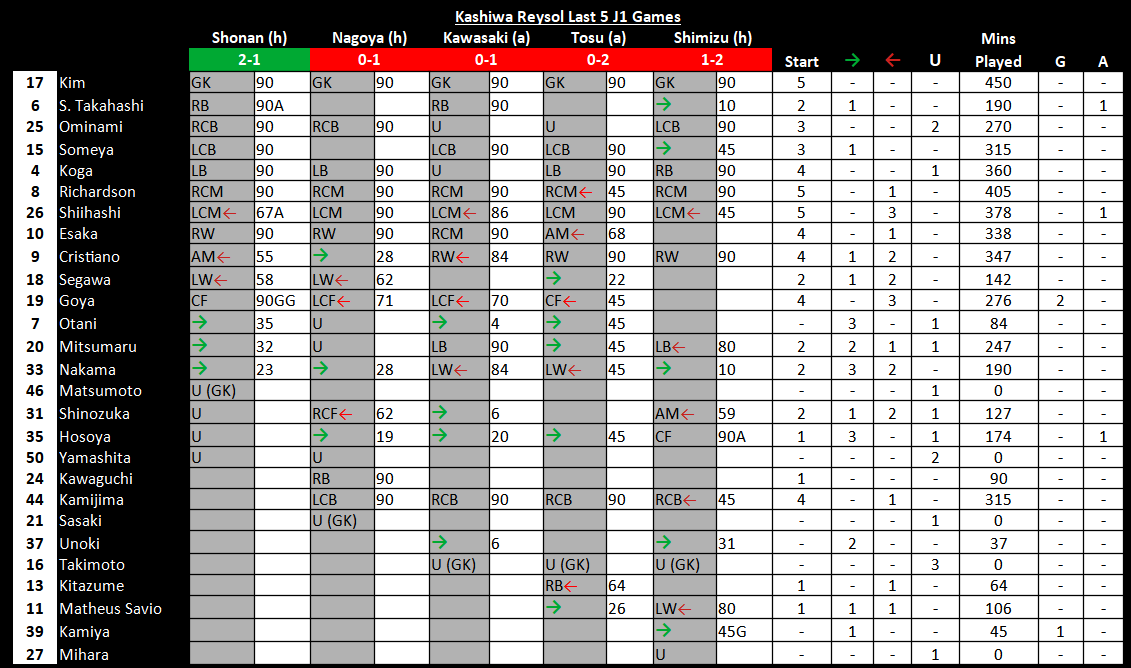 Comments: A solid start, made all the more impressive by the fact they are still figuring out their new back four system and how best to set-up their attack. Junior Santos continues to cause intrigue as it appears he’s fighting young Shun Ayukawa to be Douglas Vieira’s backup rather than being the main man himself. Hayao Kawabe could partner former team-mate Sho Inagaki in the J1 Best Eleven if he keeps up his current form.
Unavailable: Akira Ibayashi, Rhayner (injured)

Comments: A rather harsh take on them might say that they’ve swatted aside bottom half teams while failing to take the three points against stiffer opposition, exactly as they did in 2020. That said, from what I’ve seen there is a bit more steel about them this time round. I’m re-evaluating Daizen Maeda now that he’s finally added goals to his game and though Élber seems to lack the attacking x-factor of Erik, having more solid, hard-workers than mercurial artists may suit them better in 2021.
Unavailable: Theerathon Bunmathan, Daizen Maeda (injured), Léo Ceará (Visa/quarantine)

Comments: Ricardo Rodriguez seems like a lovely bloke, so I’ll spare him any blame for now, but real questions must be getting asked about the financial situation at the club. I started to wonder when Brazilians, Mauricio and Fabricio weren’t replaced last season and now with Leonardo gone, Deng injured and Yuki Abe making a Lazarus like return from the retirement home, a sojourn to J2 next year isn’t entirely out of the reckoning.
Unavailable: Thomas Deng, Yudai Fujiwara (injured)

Comments: I picked them to fill the final relegation spot in pre-season and I haven’t seen anything yet to make me completely alter my opinion. The number of changes at the back made in the off-season has definitely unsettled them and Katanosaka is still searching for the right combinations in a number of places.
Unavailable: Naoki Nomura (injured), Matheus Pereira, Henrique Trevisan (Visa/quarantine)

Comments: I’m considering starting my own Patreon account so Sapporo fans can pay me to not watch them live. Last week’s horror show at home to Kobe was their 8th defeat on the spin with me tuning in on DAZN. Second year pros Kaneko and Tanaka have been solid (Tanaka’s assist for Furuhashi last week aside) and young Ogashiwa and Nakashima have looked bright in flashes. Failure to change their slightly archaic game-plan could result in an unwelcome flirtation with the relegation trapdoor.
Unavailable: Takuma Arano, Tsuyoshi Ogashiwa, Douglas Oliveira (injured), Jay Bothroyd, Gabriel Okechukwu (Visa/quarantine)

Comments: An outstanding youth system and kantoku have their fans dreaming of ACL football next year. Didn’t score in their opening 4 J1 fixtures in 2020, haven’t conceded in their first 6 games this time round, it’s been quite the reversal of fortunes. How long can they sustain it? Will their new foreign strikers propel them to even greater heights? Will the vultures descend to brutally devour this team in a similar manner to what happened to fellow Kyushu-ites Giravanz last winter?
Unavailable: Ismael Dunga, Chico Ofoedu (Visa/quarantine)

Comments: I saw them referred to as ‘Galacticos’ the other day, but that’s not really what they are anymore. They have a healthy crop of youngsters, many of whom have been raised in their academy, developing alongside a few seasoned heads, most notably Hotaru Yamaguchi, who’s been in sparkling form so far this season. There seems to be a real determination to make amends for 2020’s pitiful league performance and 3rd place doesn’t look impossible judging by their early showings.
Unavailable: Andrés Iniesta, Junya Tanaka (injured), Lincoln, Ayub Masika (Visa/quarantine)

Comments: Things seem to have completely fallen apart over the winter at Mitsuzawa. In my season preview I predicted goals at both ends, unfortunately that has only proven to be half correct and their veteran forwards haven’t hit it off as of yet. Talented midfielders Matsuo, Seko and Tezuka are struggling against the tide, but receiving little support and, although it’s early days, I think many already see them lining up in J2 next year.
Unavailable: Calvin Jong-a-Pin, Haruki Saruta, Hideto Takahashi, Eijiro Takeda (injured)

Comments: They’ve had just the kind of solid, unspectacular start many would have expected under Lotina. After conceding an avalanche of goals over the past 2 years, letting in just 7 in 6 games must have come as welcome relief to long suffering supporters in their picturesque stadium. Lotina’s reluctance to use assist kingpin Kenta Nishizawa may have rivals sending out the feelers regarding his future availability.
Unavailable: Hideki Ishige, Eiichi Katayama, Ibrahim Junior Kuribara (injured), William Matheus (Visa/quarantine)

Comments: Collectively this is one of the 4 weakest squads in the division. That doesn’t necessarily need to condemn them to relegation, but to stave off the drop, they will need to find a way to play to more than the sum of their parts. Passing the ball from their centre-backs to wing-backs, pushing the midfield forward to join the attack, then losing the ball and getting countered constantly, isn’t the way to achieve that.
Unavailable: Isaac Cuenca, Kunimitsu Sekiguchi (injured), Foguinho, Emmanuel Oti, Nedeljko Stojišić (Visa/quarantine)

Comments: I was sure they’d used up their nine lives last year, but they look a bit better than 2020, at least if the early rounds are anything to go by. Impressive youngster Taiga Hata still hasn’t featured, but playing on the left-wing for Shonan seems to bring out the best in players and Ryo Takahashi has been in fantastic form down that flank. They really need Wellington and Welinton Júnior to bring their shooting boots over from Brazil as a lack of firepower would be the most likely cause of a relegation this year.
Unavailable: Tarik Elyounoussi, Taiga Hata, Shun Nakamura, Tsukasa Umesaki (injured), Wellington, Welinton Júnior (Visa/quarantine) 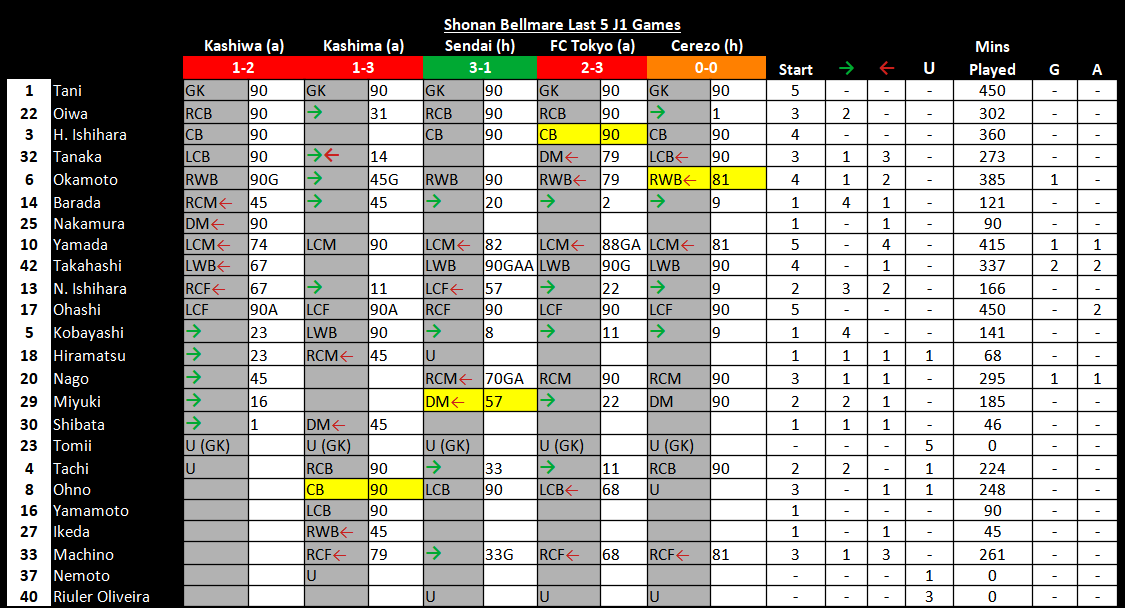 Comments: They’ve probably done as well as could have been expected given that the squad haven’t met their new Spanish kantoku face-to-face yet and most of the players lack top tier experience. Poyatos (I assume he is choosing the team) has made a number of interesting selections with Abe, Fuke, Fujiwara and Kawakami all featuring regularly despite being out in the cold during the Rodriguez era.
Unavailable: Dušan Cvetinović, Kazuki Nishiya, Koki Sugimori, Kohei Uchida (injured), Cristian Battocchio, Cacá (Visa/quarantine) 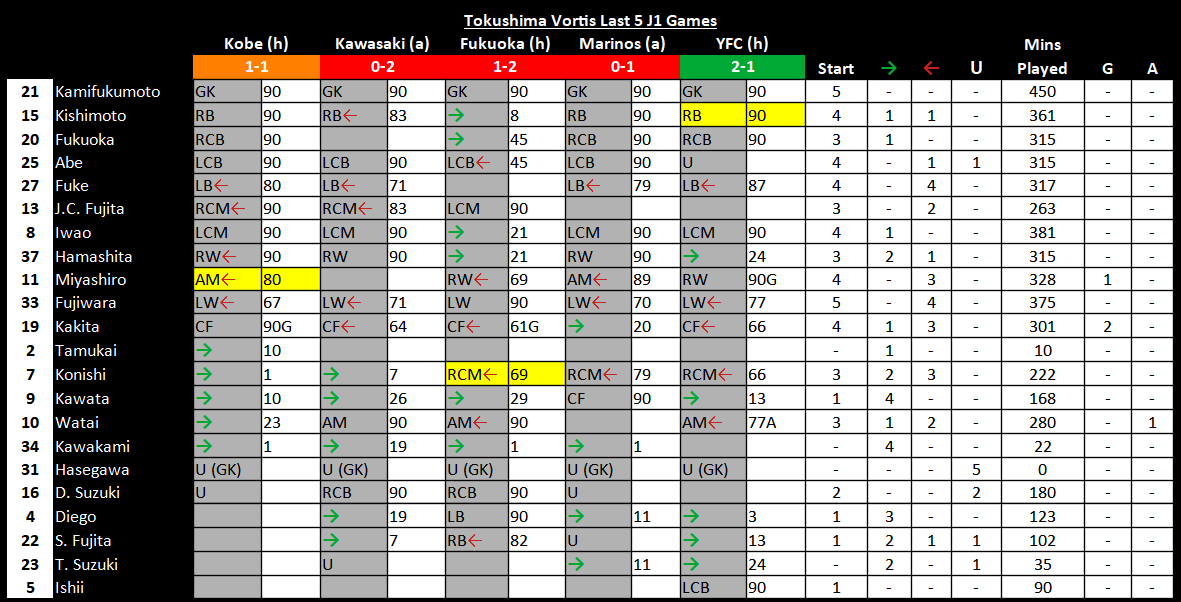